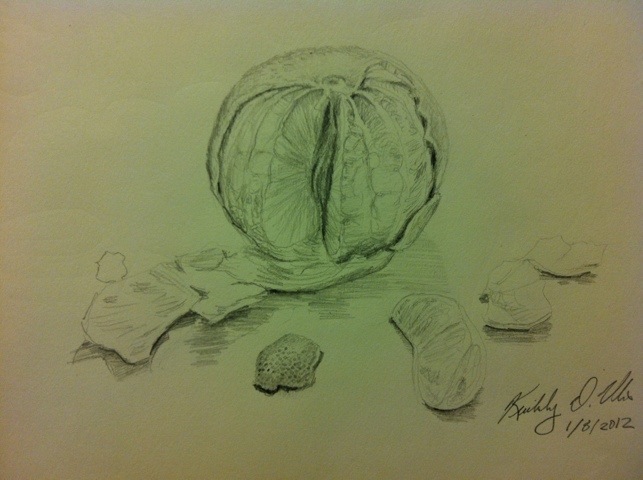 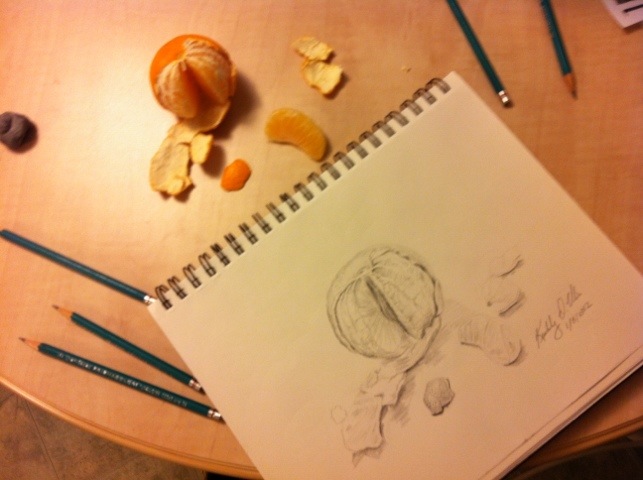 I went to the Zombie Zumba-thon at the Kress Events Center tonight. The flier they handed me two weeks ago promised fun for all and encouraged people to show up in costume. It even promised they’d do the Thriller dance. How could I miss out on that? And so I marked my calendar and waited for the fated day to come.

By the time this morning rolled around, I was beginning to have my doubts about even going. The latin-beat exorcise—I mean, exercise—festivities wouldn’t begin until 7:30…I’d have to dawdle for 3hrs after work… Whatever, I’ll pack a gym bag just in case. Screw the costume…

And so it was that I dawdled. I’m good at that, you know. I can entertain myself for hours doing nothing. It’s so weird. If I ever get put into solitary confinement, I’ll do just fine. Just don’t ask me to sit still, or be quiet—I’m not stealthy. So if I ever really were surrounded by zombies, they’d find me right away—but that’s neither here nor there. Time got away from me, as it often does. I looked at the clock and low and behold, the zumba hour was upon me.

I readied myself for a rigorous flailing by securing my hair in two bun-like puff balls perched on either hemisphere of my cranium. I still wore my specs, and I donned some mid-calf gray sweats and an Allouez Girls Softball t-shirt (my prize for designing their logo). As I waited in the aerobics room, I observed the young bodies that surrounded me…wearing their smart little costumes and I realized I looked like hell compared to them. But whatever, this wasn’t about me…it was about ZUMBA! And…fulfilling my lifelong dream of doing the Thriller dance with a large willing group of people!

And so, I enjoyed the costumes around me. And I danced to Thriller…and it was all very fun and amazing. I felt a little weird being there alone, but oh well. And the Thriller dance was fun. I sorta botched it a little bit. If I ever have an opportunity to do it again, I will put some effort into studying the Thriller choreography before hand. Zumba feels very random to people who are unfamiliar with it (i.e. me). They don’t call out the next move like they would in your standard group exercise class. It’s pretty unpredictable. So my inaugural Thriller dance was not executed with the precision I had hoped for. Although, I was so sweaty, red and stumbling by that point, I probably looked like a real zombie.

When we stopped for a break, I stood awkwardly sipping my water and clearly heard one of the college guys in the class say “Are you Chelsea’s mom?” I ignored it…clearly he was re-telling a story to the people around him. But no, he persisted, “Are you Chelsea’s mom?” Obviously directed at me. I was aghast and could only sputter, “I’m not ANYONE’S mom!” He realized his mistake and said, “Oh, I thought you were Chelsea’s mom.”

This is what I get for trying to zumba with a crowd that’s a decade my junior…each probably no less than 50lbs lighter than me. I found it difficult to thrash about with quite the same enthusiasm after that. At the next break, I asked him, “Do I really look like somebody’s mom?” The young man apologized for his mistake explaining that sometimes Chelsea’s mom would come to the Kress. That didn’t make me feel any better. He said he didn’t intend to hurt my feelings. Okay, maybe a little better. But what I didn’t ask the was burning question—is Chelsea’s mom hot?

And so…my costume for the evening was Chelsea’s mom. Seriously. Do I really look old enough to have a college-aged daughter?

I’ll need to re-consider my appearance before I do zumba at the Kress again.

And when I say, “by popualar demand” I mean…the single-most popular person fancied by moi demanded it.

Now go run along and play.

Seraphic Fire recorded an album of Monteverdi’s Vespers of 1610 in a little stone chapel in Kalamazoo, omitting the optional giant Baroque accompaniment the piece is typically performed with. When no record label would take their album, they released it themselves and put it on iTunes.

When it got featured in iTunes, conductor Patrick Dupre Quigley took a screen capture and posted it on facebook, tagging each of the performers in the image. By the end of the day it had moved into the 18 best selling classical albums on iTunes. Within 36 hours it was number six (sandwiched between Yo-Yo Ma and the London Philharmonic Orchestra).

Here’s their album on iTunes,

here’s photos and video of the production of the album,

and here’s the story in NPR.

And the best part? I have tickets to see Seraphic Fire when they come to Green Bay in January! WOOO HOOO!
If you’re interested, you can get Brown County Civic Music Association season tickets here: http://www.bccivicmusic.org/tickets/ (Individual tickets are available if you call Civic Music or buy at the door.)

I couldn’t find a conference room in SS1400 today because the room numbers lead right up to and down from what I knew to be the Health Center. Every room number existed, except for the number I was looking for. Only after I asked Todd for help, did I realize the Health Center was clearly labeled 1400 and the conference room must be inside. Sometimes we see only what we want to see—sometimes at great expense to ourselves.

Bike rack was an epic failure. I realized I couldn’t put it on last night because my car won’t fit in the garage with it on. I didn’t want to leave it parked outside all night. So I decided I’d do it this morning—probably my first mistake.

I couldn’t find instructions or any information about the Graber bike rack. So I got dressed. I hadn’t gotten around to doing laundry—no pants, so I put my favorite purple skirt on and went outside to put the rack on my car. I did my best—figured out how to get the rack on my car so that it felt secure.

The trouble began with getting the bike on the rack. I tried 3 times—pinched fingers, hit myself in the face with the f*cking bike, cut my lip up a little. I got it on there, but the little bungees on the rack were loose over the bike. I’d have secured it better, but my bungee cords were inside the damned trunk. So I took the whole works off and tried shoving the bike in the trunk, which didn’t fit. So I secured it with bungee cords only to realize my trunk light would be on all day if I left it in my car like that. By then I was 5 minutes late for my arrival at work, so I gave up on the bike. This is very disappointing because I bought and mounted a new bike seat, a kick stand and bought a bike lock. I put air in my tires. I was really looking forward to biking on the Fox River Trail with my “at work friend” for the first time today…she was even nice enough to loan me this bike rack.

So I hurried inside to grab my crap. On my way out again, slammed my skirt in the f*cking door and ripped it—damn near off my body. Went inside to change.

Having a crappy morning. I also realized this morning a new site I produced had been live for nearly a month with no tracking code, due to my own negligence…I feel really bad about that. I must not let this ever happen again.

I wonder if maybe I could borrow one of my parent’s bikes after work and ride it over to the trail to meet my new biking pals. (I always wanted biking pals.) I could get there in 15 minutes biking from my parent’s house. Maybe next Monday I could make a point of coming in to work early to scoot at 4:15, get to my parent’s house with time to dress and be at the meeting spot by 5pm.

I took a ride down the stairs last night. The previous owners of my home thought it would be a good idea to paint the stairs with high-gloss powder blue paint. This, coupled with my fondness for fuzzy socks, can make a trip downstairs treacherous. Last night’s incident was particular in that I also happened to be wearing my fuzziest pajamas, lending distance to the low-friction slide that would imminently follow, paddling my ample bottom all the way down to the third remaining step.

And really the worst part, I think was the feeling of my posterior meeting the first step, more than the slide. The thing that’s really remarkable is that my left buttock now sports a bruise that bears uncanny resemblance to the band of the Milky Way. Who’d have thought that Milky Way’s really would go straight to my ass.

Don’t be sad when the holiday candies, cookies, and snacks you labored to produce run out. Be happy at the thought of all of the people with whom they were shared.

And if you ate them all yourself, it’s probably best there aren’t any more left.

Like clockwork, my seasonal blemish took up residence on my chin. This pimple pops up magically on Christmas morning and lasts through to the new year. This zit, zeitgeist of the Christmas season, is brought on by a combination of holiday stress and change in diet. It’s magical…like Christmas Snow. It shines brighter than Rudolph’s nose. In holiday photos, it glows redder than the red-eye. Its big, its bad, and its tradition.

I’m sure I’m not the only one who experiences this phenomena, but I’ve come to expect it, and even look forward it. It is, after all, a metaphor for the holiday season: festively colored, filled with fun, a little bit painful, and lasts about a week and a half.

And so, I encourage you to embrace your blemish. Don’t attempt to cover it up, we all know it’s there, anyway. Its just your face is wishing you a Merry Christmas and a Happy New Year. So listen to your face and be merry and happy or you’ll never get rid of that damn pimple.